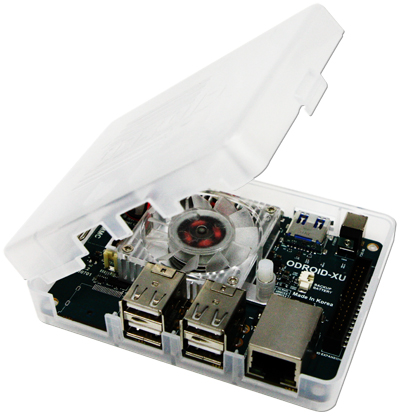 The ODROID-XU lite board, plastic casing, active cooler, and 5V/4A power supply are all included in the base kit. Installing the operating system requires an extra MicroSD card or an eMMC module. According to the XU4, when it comes to current Single Board Computers, it operates more like a typical personal computer than a gimmick like the Raspberry Pi. More processing power, double the RAM, and, in my opinion, a board that is at least twice as powerful as the previous generation.

More powerful, more energy-efficient technology and smaller physical size represent the next generation of computing devices. With open source support, the board can run a variety of Linux distributions, including Ubuntu and the Android 4.2 operating system. The ODROID-XU lite provides users with fast data transfer speeds using an e-MMC 4.5 storage device and USB 3.0 interface, becoming increasingly essential to support advanced processing power on ARM devices. It permits users to completely experience an advancement in computing, including 3D game experience, web browsing and faster booting. The source code for the platform (u-boot, kernel, and Android) and documentation will be made available on the ODROID official forums.

The widespread use of Single Board Computers and the consequent maturing of its ecosystem have made setting up a home server a reasonably simple task. Aside from video decoding, the ODroid-XU lite may be the right choice for you if you search for a compact, high-speed four-core ARM system that can quickly run Fedora or other Linux distributions. When it comes to OpenSSL performance, the ODroid-XU has a significant advantage, and it also boasts the most extraordinary Octane performance of any ARM system in the series.

What sets the board apart?

The ODroid consumes around 2 watts while idle on a 1080p desktop in terms of power consumption. The fan noise and lack of support for hardware-accelerated video playback were the two most significant drawbacks I noticed with the ODroid-XU lite. The CPU itself should be capable of decoding and displaying information in up to 720p resolution. The ODroid-XU lite has eight CPU cores that are configured in a big.LITTLE configuration, with four of the cores being active at any given moment. The Single Board Computer is equipped with 2GB of RAM, two USB 3.0 ports, a micro HDMI connector that can produce 1080p video, a microSD slot, and the option to connect up to 64GB eMMC flash memory to the system.

Odroid is a portable game console that runs on the Android OS. The developer edition is designed for individuals interested in creating programs, games, or other content for Odroid users. The Odroid device comes with a debugging board, source codes, and schematics to assist developers in the development process.

The only thing that distinguishes it from the original ODROID-XU is the highest clock speed of the A15 cores. The XU Lite features a 1.4GHz processor, whereas the original XU has a 1.6GHz processor. The rest of the features are exactly the same. When combined, these features enable developers to create innovative and appealing mobile apps that take advantage of the full capability of Imagination’s PowerVR SGX544 graphics processing unit (GPU). On paper, the performance of the Odroid XU lite is equivalent to that of the Raspberry Pi 4. Thanks to blisteringly fast data transfer speeds made possible by the eMMC module, USB 3.0, and Gigabit Ethernet interface, users will be able to boot up faster, browse the web more quickly, and even play games faster. The features make it easier for the device to manage Web surfing and high-definition video and game apps, among other things. Software may get uploaded through the Android Market or SlideME, an alternative to the Android Market.

SBCs from Hardkernel have been used to build various multi-purpose projects, including a home theater PC that runs Kodi. The Odroid XU lite delivers consistent performance across many emulation systems, including the most demanding ones. It could be used for cryptocurrency mining. The Odroid XU4 bitcoin mining device, like the Raspberry Pi, will not generate much money, but it will provide a quick and simple learning experience. The Odroid XU lite is a fantastic maker board that can be utilized for numerous projects.