The ODROID – H2+ is a fully featured and powerful mini PC. This small sized board comes ready out of the box ready to serve as the motherboard of a do-it-yourself NUC-style computer. Based on the Intel Celeron J4115 Gemini Lake Refresh processor, this little PC has more heavy lifting power than you would expect for its small 4.3″ x 4.3″ size. As an upgrade from the original ODROID – H2, the H2+ includes dual 2.5GbE Realtek RTL8125B NICs, so you have up to 5Gbps of networking power on a small, affordable $119 assembly. This tiny computer can browse the internet or run simple office software with ease, and with a little tinkering can run more powerful applications, including emulating and playing 3D video games, even for console generations as recent as the Nintendo Wii (Hardkernel doesn’t condone piracy, and all emulation should be done legally). 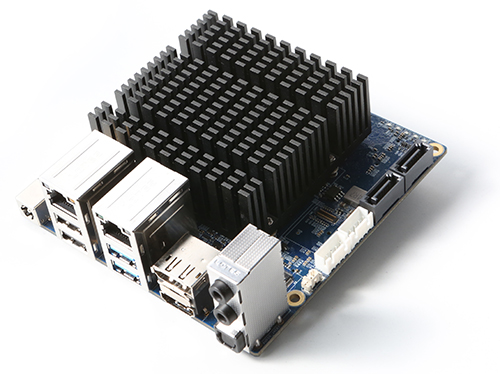 Key features of this mini PC include its Intel Quad-core processor J4115 (14nm) with 4MiB Cache CPU, with up to 2.5Ghz(Single Thread) or 2.3Ghz(Multi Thread) capabilities. The GPU is an Intel UHD Graphics 600, which is powerful enough to emulate a Nintendo Wii’s 3D graphics, despite its diminutive size. Dual-channel Memory DDR4-PC19200, a total of 32GiB RAM Space with two SO-DIMM slots, and four PCIe 2.0 slots make this board a versatile and robust computing option. Two 2.5Gbit Ethernet ports are present (the ports need Realtek RTL8125B drivers to be manually installed due to a missing driver in the Linux Kernel). The board features two SATA 3.0 for easy HDD or SSD expansion options, and supports eMMC storage. The H2+ comes with a large number of ports in a small space, including two HDMI video outputs (capable of supporting dual 4K UHD displays with refresh rates of 60 Hz simultaneously) and four USB ports. A Gen 2.0 dual audio ports with a S/PDIF output is present and ready for simple speaker hookups. This board comes with a large heatsink and is designed for passive cooling, but is compatible with fans for more heavy lifting applications. The H2+ comes ready out of the box to run Linux Ubuntu, but is also compatible with a large number of other Linux distributions. This mini PC is also capable of running Windows operating systems, if that’s your preference.

The ODROID H2+ was discontinued after a fairly small release window. This wasn’t because of lack of interest from customers or and kind of lack of capability, but simply because of the global chip shortages that have come along with the worldwide Covid 19 shutdowns. Hardkernel made the hard decision to discontinue the H2+, rather than letting it sit in “out of stock” limbo for what may turn out to be years of waiting time for customers. But while this has made the ODROID H2+ more challenging to get a hold of, if you have the opportunity to buy one it is well worth it. If you are looking for a powerful mini PC with an abundance of ports ready to assemble out of the box, the ODROID – H2+ is well worth the extra effort to seek out.