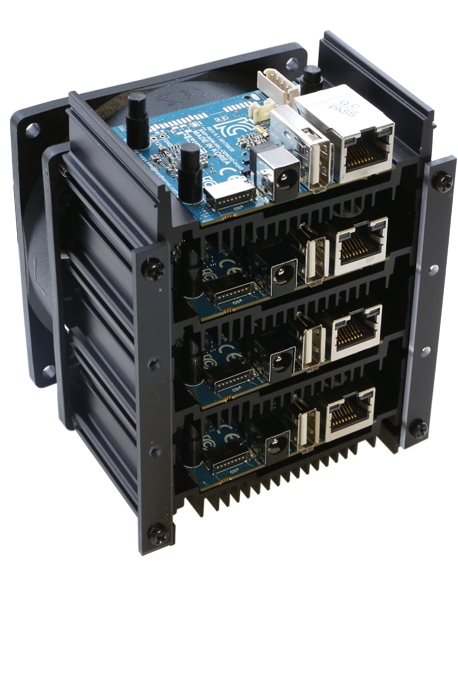 Each of the cases has an 80mm USB fan mounted to the back of it to offer adequate cooling (which also has a built-in heatsink). It is possible to create your own customized cluster of devices for educational and professional purposes using the ODROID MC1.

Many parallel computing programs such as Docker Swarm, Build Farm, and many others are capable of running on this 32-core cluster computer, which is available at a low cost. This device is equipped with multiple interfaces, including MMC 5.0, USB 3.0, and Gigabit Ethernet, which are all required for enabling increased processing power on ARM-based devices. Users will benefit from faster booting, surfing the web, networking, and 3D gaming due to these improvements.

With the ODROID-MC1, a gadget that stands for My Cluster, you can have an affordable and powerful personal cluster at your disposal. Compared to the ODROID-HC1, it is devoid of a SATA port and is equipped with a large cooling fan to cope with the demands of high processing power. When it goes on sale in September of this year, it’s likely to sell for around $200.