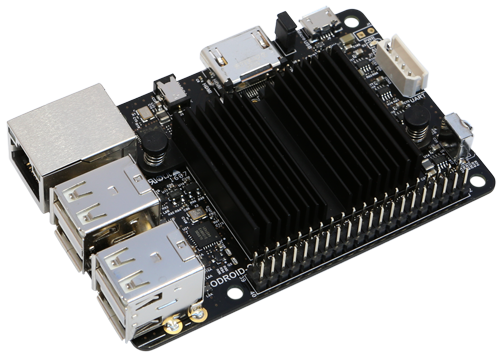 The ODROID-C2 looks very similar to the ODROID-C1 but it has a lot of improvements mostly to performance. It is using an Amlogic S905 system on a chip. This features a Cortex-A53 CPU which is 64 bits. The previous model only had a 32-bit CPU. The C1 is still only 1.5 gigahertz and it still only has four cores which is pretty decent but isn’t as good as some of the higher end models. Instead of the Mali-450 MP2 it now has the Mali-450 MP3 GPU which is slightly faster. The RAM has actually doubled. It now has two gigabytes of RAM instead of one gigabyte. It has four USB 2.0 ports and it has HDMI 2.0 or type A HDMI for video output. Unsurprisingly it does have gigabit Ethernet which is very nice. This is also pretty common with most of the newer ORDOIDs. It includes the normal GPIO and IO expansion pins that you would expect. It is powered by 5 volts and 2 amps from a 2.5 * 0.8 mm plug.

All in all this is a pretty decent single board computer but it’s not the latest in the C series of ORDOIDs SBCs. It has been superseded by the ORDOID-C4 which is the newest odroid SBC in this series as of this writing.