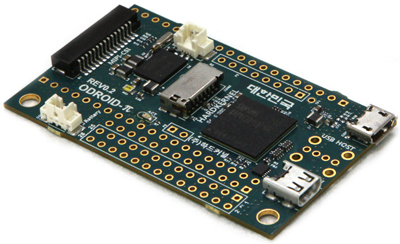 The ORDOID-W is a little bit different from some of the other models. The first thing you will probably notice is the size. It is an extra small single board computer very similar to the Raspberry Pi Zero. one of its features or selling points is that it is supposedly fully compatible with Raspberry Pi software. It is geared towards wearable devices, electronics prototyping, and the Internet of things.

It is a little old. It’s from back in 2014. It features a Broadcom BCM2835 system on a chip which features an ARM11 CPU. This is a 32 bit CPU and it runs at 700 MHz. For a GPU it includes a Broadcom VideoCore IV. It only has 512 megs of RAM which is not a huge surprise for something the size. Supports both SD cards and eMMC. It only has one USB 2.0 port and one micro HDMI port which is 1.4a or typed D. It does include a lot of the normal ports like GPIO. It also features a MIPI CSI port that can be used to interface with a camera.