How Long Can A Raspberry Pi Run On Batteries? 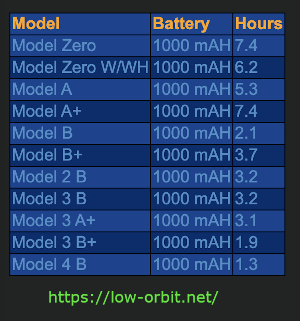 When looking at a Raspberry Pi one of the first things you would probably think about is making it mobile. Being as small as they are, they make great candidates for mobile computing devices. You’ve probably wondered about a few things. What types of batteries can be used? How do you actually connect the batteries? How long can a Raspberry Pi run on batteries? These are all great questions and can be answered with: “It depends”. Keep reading for more details.

There are a few things to take into account:

We are using a 1000 mAH battery for this chart. If you were to swap this for a 4000 mAH battery you could just multiply the hours by 4 so 7.4 would become 29.6. We’re also assuming no peripherals. These numbers should be on the low power usage / high hours end of the spectrum. As a vague rule of thumb you could cut the hours in half if you are under load.

How Long Can A Raspberry Pi Run On Batteries? Details On The Original Pi

The Raspberry Pi can only draw a max of 1A. It is limited by a fuse. A 500mAh (0.5A) battery would last about 30 minutes assuming the Raspberry Pi is pulling as much as it can. This chart assumes that you are using a Raspberry PI Model A or B and that you are running it at a high load.

One person had a camera and a robot arm connected. The robot arm was separately powered. They were also running an Apache web server and sending video data over a wifi connection. They had a fair amount going on. For them, a 4000 mAh battery lasted about an hour.

People have claimed that they could use a 3000mAh battery to power a model A with a camera for 15 hours. 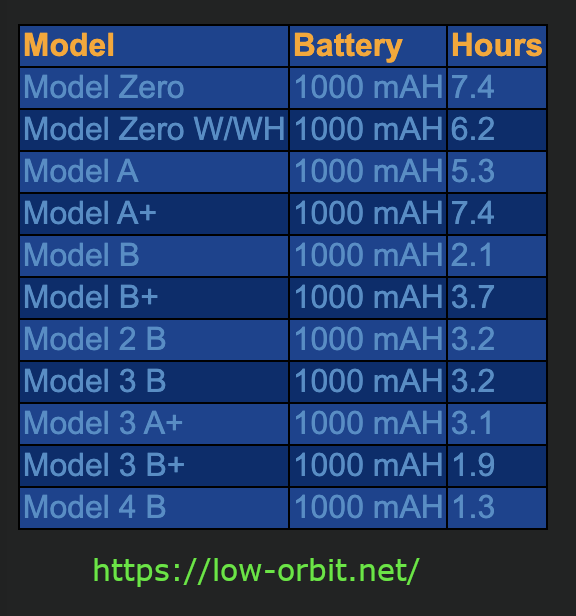