The future that never was…. Project Looking Glass was a 3D desktop environment sponsored by Sun Microsystems. It was built in Java.

Programs could be built specifically for this environment but they didn’t have to be.

Its kind of sad the the project never really suceeded. It is kind of like the futre that never was. Way back in 2004 they were talking about how our desktop metaphor is 20 years old and that it is time to replace it with something better. At the time desktops were 2D but since 3D technology was making so much progress it was time to make the next big logical step and move to 3D. The idea was amazing and I pretty much assumed that this was inevitable. If not them then someone else would have to do it. Now here we are in the year 2020 still mostly using 2D desktops. There have been serveral technologies that provide 3D effects for the desktop such as compiz but they aren’t quite the same and surprisingly aren’t that popular. 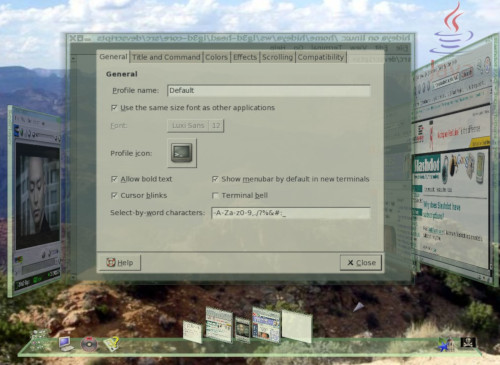 One of the ideas was that people could turn windows around to write notes on the backs of them.

Notice the launcher bar. It looks a lot like the bar that was used in a few verisons of OSX years later. 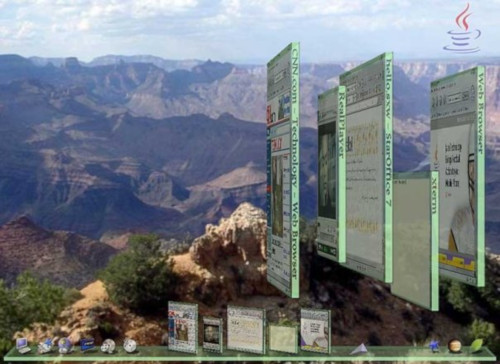 We actually tested out the live CD in VirtualBox. Due to it being so old and due to probably several different reasons ( probably drivers ) we weren’t able to get it to display with a decent resolution. I’m acutally kind of surprised because it is currently more than 13 years later and I’m running this VM with an i7 9700k and 1 GB of RAM. I was kind of expecting it to run pretty well.

When you start it up it will bring you to a Graphics configuration menu. You can boot into Fluxbox with Looking Glass running. This runs VERY slowly. You can try booting into plain XFCE but there isn’t much point to that. I was able to get a relatively smoother experience by selecting LG3D fullscreen mode ( option 5 ). It still doesn’t run well on our VM. After this menu you will be given a choice of what driver you want to attempt to use. Both options 1 and 2 failed and I wasn’t able to start the desktop. Option number 3 ( the kernel driver ) worked. 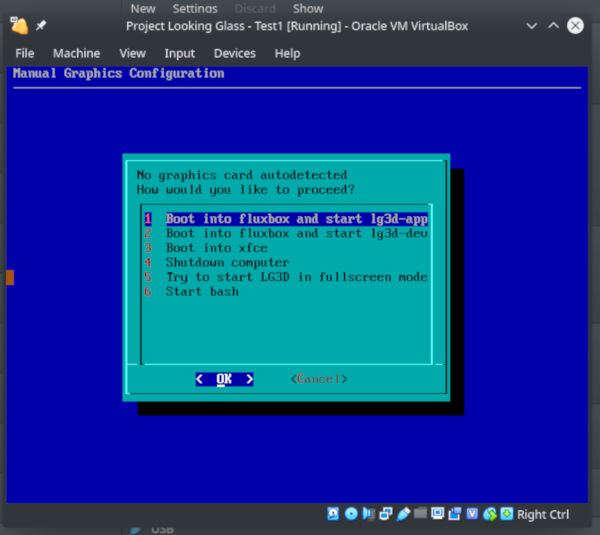 Once you get it running it is kind of interesting but really slow and pixelized. I expected more on a modern VM. It would be interesting to see this running on physical hardware. There were some neat effects. It has a neat pop up app that allows you to set the wallpaper. You can select your background from a spinning 3D set of pictures. You can also open up a similar spinning selector widget that lets you select CDs. This was from a point in history where CDs weren’t considered ancient. It also had an iteresting little menu that sort of popped out of the bar.

Web browsing actually worked we were able to launch Firefox and load google. The only issue with accessing sites is that SSL certificats won’t work since the browser doesn’t have an updated list of authorities. It won’t recognize anything modern.

For this to really be useful in a modern environment it would need some work. It would need to be polished up a lot. Functionality would need to be tweaked and it would need to be able to run on top of a modern distro. This could probably all be done without too huge an amount of effort. It would be kind of nice if it could be revived. The code doesn’t seem to be available anywhere now. Since Oracle bought out Sun and shutdown Java.net the project is no longer there. It is on archive.org but the actual code isn’t included.

There is a live CD demo that you can download. You can download the latest version from us. This is from way back in 2007 but still the newest version out there as of today ( April 2020 ). I pulled this from Source Forge myself. As of now they currently have a few different versions available to download if you check the link in the references section.