AppDynamics is an application performance management (APM) tool. This means that it goes quite a bit further than just monitoring memory and CPU usage. It allows you to trace and measure every connection within your application and between applications within your environment. 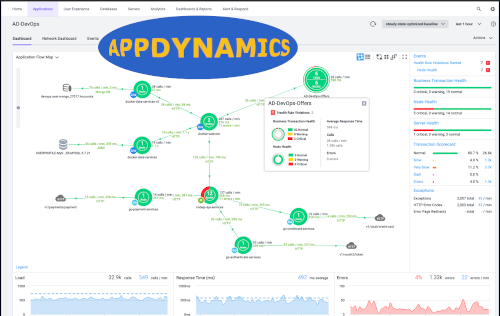 AppD automatically creates a baseline from captured data to build an understanding of what is ‘normal’. It then automatically detects anomalies. If a given operation takes longer than it normally does, AppDynamics will report this. It also allows you to not only see how long a transaction is but how long each step takes. You can drill down and figure out exactly where an application is slowing down. This makes it easy to find bottlenecks.

AppDynamics supports a large number of platforms and technologies. It can trace multiple differnt connection types. This includes calls to a REST API, SOAP calls, database connections, JMS connections, and just about anything else you would find in a large interconnected system.

Top competitors or alternatives to AppDynamics:

Both of these con be considered basically equivalent but there certain use cases where one tool may be stronger than another.