How to Remove a User From a Group in Linux

There are multiple different methods and commands that can be used. If you are wondering how to remove a user from a group in Linux you have options to pick from. I’ve used the following Linux distros/versions to test these commands:

If you just want something that is easy and works on all of these, use the first command shown below ‘gpasswd -d user group’. 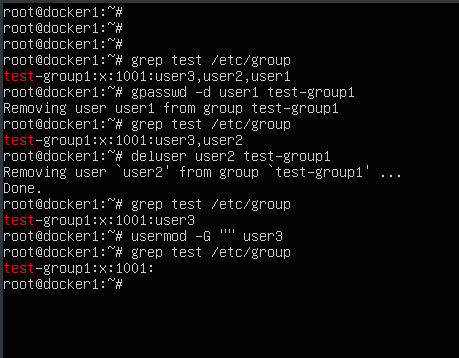 In general, after making changes to a group the user will need to log out and back in again. The effect won’t go in until they log out. At least, it won’t afffect their currently logged in session. If they login using a second terminal at the same time, that should be updated.

NOTE - We assume you’re running as root. If not you are going to want to use sudo with all of these commands.

Here is a demo video of what we cover on this page. You can scroll past it for more details.

Use this command to remove a user from a group in Linux:

This worked great on all three systems, Ubuntu, Fedora, and CentOS.

This worked great on Ubuntu. It didn’t work on CentOS and Fedora. The command didn’t exist on either of those distros. People also report this working on Debian which would make sense.

The Manual Way - Use vi

You can always just edit the group file manually using vi ( or emacs, pico, nano, ed … ). It should go without saying that this works on all distros. It even works on non-linux systems like Solaris.

To remove user2 from test-group1 change this line:

How to Remove a User From a Group in Linux? Use vigr

With a special tool vigr:

This works pretty much the same as manually using another editor to edit the file. The difference is that you don’t need to specify the file name. This command will open the /etc/group file with the editor of your choice. It also is supposed to set locks to prevent corruption.

We tested this out. It looks like all three systems ( Ubuntu, CentOS, and Fedora ) have this command. We didn’t actually use it to remove any users though.

We tested this on all three systems and it works exactly as expected ( Ubuntu, CentOS, and Fedora ).

Remove from all except the listed groups:

Remove a user from all groups except thier own: