What is Ansible Tower?

This is probably the first question you would find yourself asking, “What is Ansible Tower?”. There are many different software tools out there and often times they have overlapping functionality. What role does each tool play? How does it fit into your digital ecosystem?

Ansible Tower is basically front end GUI to manage and monitor Ansible. It is a front end web interface for doing many of the same things you would do on the command line with Ansible.

One of the biggest features that people were asking to have added to Ansible was a front end GUI. This would be needed to be competitive with other similar software solutions. The much desired answer to this is an amazing web interface called Ansible Tower. It is so much more than just a web interface though. It includes a backend database and a bunch of other components.

If you aren’t overly familiar with either of these tools you might be asking yourself, “What is the difference between Ansible Tower vs Ansible?”. In short, Ansible is the underlying configuration management tool and Ansible Tower is a GUI for managing that tool. You don’t need Tower to be able to take full advantage of Ansible. You could run it by itself or combine it with another alternative front end GUI. Tower does provide a bit more than just a web interface. It provides a database, user authentication, and a bunch of other features as described in the section above.

No, it is not free. You can try it out for free but ultimately it is going to cost you money. Unlike basic Ansible, Tower is not free. If that doesn’t work for you, than you may consider using one of the many alternatives. These include Rundeck and Ansible Semaphore. You can read more about these further down on this page. We also have a page where we talk all about Rundeck HERE. Tower is a great tool and if your budget allows you to pay for something, this wouldn’t be a bad choice. As with everything, make sure to evaluate your options carefully.

It does come with an API that we are planning to cover, potentially in detail.

For more details on capacity and requirements check out the link to the official documentation HERE. If you can’t be bothered with their verbose documentation, just stick wih this page.

NOTE - PostgreSQL and Ansible will be installed by the install script automatically ( unless Ansible has already been installed by a package manager.

You might want to put your database on a separate, dedicated server. This is a terrific idea but it takes a bit more work. Ansible Tower will automatically install PostgreSQL for you when you run the installation script. You can optionally decide to install PostgreSQL yourself on a separate server and then configure Tower to point to that instead.

If you are using Ansible and you want a graphical front end the logical choice is to use Ansible Tower. This makes great sense but you may want an Ansible Tower alternative. There could be different reasons to want an alternative but the most common reason is probably price. After price, other reasons might be that you just don’t like the feature set or you want something that can be integrated into your environment more easily. Both Rundeck and Ansible Semaphore are great alternative tools that are available for free. Also, worth noting, is another piece of software called AWX. This should probably be your first choice if you want an equivalent alternative because it is actually what Tower is based on. 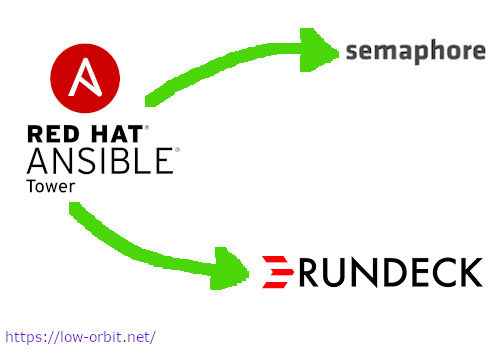 This is an open source tool. Ansible Tower is actually based on this tool. If you are looking for something that could be considered an open source Ansible Tower version, this is it. When RedHat bought Ansible, Inc. they made the commitment to open up the source for Tower. AWX is the result of that.

You could say Ansible Tower is to AWX what RHEL is to Fedora Linux. AWX is open source but sponsored by RedHat. It is more cutting edge and will tend to have newer features sooner. These features may eventually make their way into Tower. Keep in mind that AWX doesn’t come with any support other than what the community provides.

This is an interesting open source tool that is mean to be a replacement for Ansible Tower. It lets you run Ansible tasks from a web interface. This is far from being an enterprise solution. The documentation seems a little light and I wouldn’t count on getting any support. It does seem like a good tool though. It is open source and can be found on GitHub. The front end is written in Angular and the back end is written in Go. This is something to keep an eye on.

NOTE - Apparently a lot of companies/products like to use the word “semaphore” in their name. Make sure you don’t get them mixed up.

Rundeck As An Ansible Tower Alternative

Rundeck is a really great tool that overlaps much ( all? ) of the functionality of Ansible Tower. It isn’t specifically meant to be a Tower replacement. It is more of a general purpose tool for launching jobs of all types. These could be Ansible playbooks, scripts, or simple commands. If I were looking for an alternative this would be at the top of my list. Learn more about Rundeck HERE.

Currently Ansible Tower is owned by RedHat. It was originally owned by Ansible Inc. which was bought by RedHat. Red Hat was also recently bought out by IBM.

Apparently, as of March 2020, it is pretty easy to download Ansible Tower. If you go to THIS URL you can find versions ranging from all the way back in 2015 up until 2020. They are all listed there as tarballs that you can just download without signing up for anything. You could even use wget or curl to pull them down using a script.

If you click on the link for the free trial on ansible.com, you will be taken to a form. Once you fill out the form, you will be given a download link. You don’t actually need to do this just to download Tower.

You will need a license though so you will want to sign up anyway. If you don’t want to deal with licenses you could use AWX as an alternative.